I’m grateful to our member “Cycling Pete” who sent me this link (that he’d received from the Edinburgh Bicycle Co-Op):

In a meeting of minds, the self-confessed mod and the “Modfather” share anecdotes and their love of music in a programme that will be broadcast from 13:00 GMT on Boxing Day.

Wiggins, voted the BBC’s Sports Personality of the Year on Sunday, recalls his school days and pretending to be Liam Gallagher. He also talks stick-on sideburns and plays down his chances of a knighthood.

Phil Letts will be leading this ride and writes:

This is ride follows or shadows the Midshires Way all of which is now on good road surfaces so road bikes required.

Then the return follows the National Route 6 back through Quinton, Great Houghton and Northampton to BVW (10miles)

The CTC Northamptonshire & Milton Keynes Christmas lunch was held today at our usual venue, The Old Dairy Farm in Upper Stowe.  Thirty members were in attendance.

Six members from CTC Northampton rode to the Lunch from Hunsbury: John W, Eleanor, Bob, David, Ian and our leader Bill.  (Phillip and Rowan made an assisted journey; John C was meeting up with Max in the Bramptons; Phil L broke his chain – and mangled his gear changer – on the way to the start; he returned home and rode solo to the Lunch on another bike!) On a dry, sunny, mild morning we made our way through Milton Malsor, Rothersthorpe, Bugbrooke and Nether Heyford to a sociable elevenses stop at Flore (The Paddocks tea-room). David returned home at this point.

Despite our pause for elevenses, we found we were among the very first to arrive at the Lunch venue where festive delights awaited us in the pleasant upstairs room set aside for our party.

Thoroughly refreshed, we made our own ways back home.  My total mileage to the venue was 20 and my return 11.  A splendid start to Christmas – and big thanks to the organiser, John Weller!

A first for everything: a card-carrying atheist enjoying riding and taking part in the (61st) Annual Carol Service of Leicestershire & Rutland CTC!

Brian, David and I met at “The Windhover” at 10.00 a.m. on a bright morning.  We’d planned a simple ride along the Brampton Valley Way.  A mountain bike along this track is slower than a road or touring bike along the lanes.  Enjoyable though, once in a while – and you can chat as you ride. 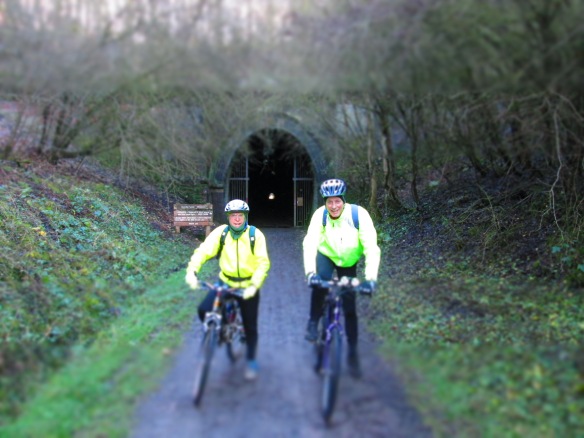 By 11.20 a.m. we were at the Waterloo Farm Café and met up with Max and Pete from CTC Kettering and our very own John Cutler.  Refuelled, we took the road route through Market Harborough to Great Bowden and SS Peter & Paul’s.

Chicken stew for lunch in the church hall and then into church!  A welcome from the vicar (Rev James Shakespeare), seven carols, six readings (one by Max), a brilliant prayer (May God bless Sustrans!) and a nice address from the vicar.  He quoted from “Little Gidding” – so Shakespeare quotes T S Eliot (boom! boom!).  Tea and mince pies in the church hall.  Fellowship renewed, new friends made.

A fairly slow cycle home.  John was on his Brommie – for the Brompton Valley Way (groan! groan!).  And we arrived back at The Windhover in the dark.  Great stuff!

Tony Care went on this month’s Origami ride – organised by The Folding Society – and writes:

I arrived at Meriden in bright sunshine after a trouble free drive and was
thoroughly looking forward to the ride, the conditions were perfect, a cold
crisp sunny winter morning. The only draw back was I had only just recovered a
few days earlier from a nasty virus, which had left me with the residue of a
chest infection, but I had established beforehand I could cut the ride short, at
any point should I need to, so all eventualities covered.

The ride started from the Meriden Tea Rooms, well known to most cyclists, being
only a few yards from the famous Cyclist’s Memorial on the green.

Setting off from Meriden Tea Rooms

I should point out that at the Christmas “Origami Ride” it is regarded
obligatory to decorate your bike as well as yourself on a festive theme and I
was attracting quite some interest from passers by as well as the riders –
resplendently dressed as “Santa” with my red Brompton ablaze with red tinsel and
flashing lights. I am glad to say there were plenty of other Christmas hats,
coats, ear muffs, bells and flashing bikes in evidence too, but, judging by the
enthusiastic comments, I was the bookies favorite for the best adorned bike and
rider prize. 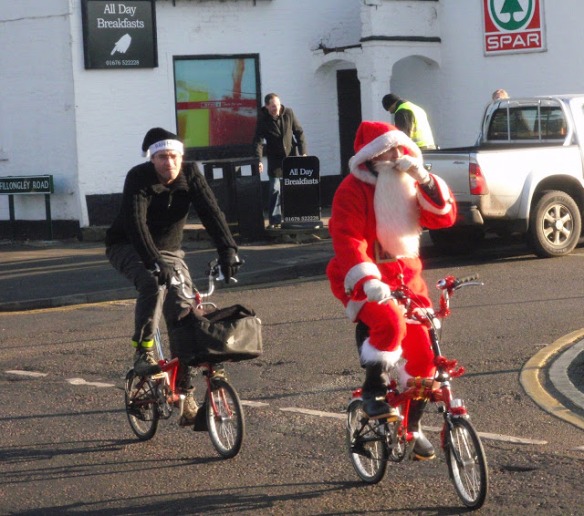 The ride was to the north of Meriden in picturesque lanes near
Packington Deer Park in the countryside between Shustoke and Fillongley and
there were variations of approximately five, ten or fifteen miles dependent on
which short cut on the map you took (“Heath Robinson” folders are sometimes
specially created just for the Christmas ride, hence the “Get-out-of-jail free”
routes back to The Bull at Meriden. None were in evidence this year though!)
Although the ride is an important part of the day, a big focus is the social
“Christmas” lunch that follows and everyone was looking forward to both.
If anyone tells you Warwickshire is gentle rolling hills, they are wrong! There
are some stiff climbs and with my residual chest problem I was soon feeling them
and it, wheezing my way up the steeper inclines. Despite being a clear bright
day the lanes were running with water and at one point, at the bottom of a
descent, we were confronted by a completely flooded road from one side to the
other, so it just goes to show how wet it is everywhere at the moment (a very
considerate driver waited patiently as we all made our way through, I thanked
him for waiting and he said it had been like it for weeks, he had slowed as he
knew it would be there).

The Origami Peleton in the Warwickshire lanes

Shorty after the next hill I started to feel a bit tight across the chest and
advised the “Sweeper-up” that I was taking one of the short-cuts back to
Meriden, as it turned out, a very challenging short-cut, as I shortly came
across a three way divide and as the lanes were single track and well out in the
“Sticks”, the signs were not just sparse, but non existent. so I asked a local
farmer who was in his yard washing his four wheel drive, which way to go, he
sent me the quickest route, rather than the cyclists route, which unfortunately
for me took me over the highest point in Warwickshire (the forest of aerials on
top should have told me something), apparently the local cyclists call it the
“Ansty Alps” (I was informed later). Anyway, a three speed Brompton was not the
bike to be climbing it on, I can tell you, I was puffing and wheezing like a
train when I reached the top! The short ride into Meriden was not surprisingly
all downhill and on a main road, so I got plenty of hoots and waves dressed as I
was, of course, as “Santa” I did my duty and returned all the waves, (it would
have been unforgivable to disappoint any children in the cars), I had an aching
arm and was feeling very festive by the time I reached The Bull. The main group
arrived not too long after and we had a splendid pint of Timothy Taylor’s, a
good lunch and good company and yes I did win the best decorated bike and rider
prize, which was presented at the lunch along with plenty of good-natured
banter. Chest problem aside, a most pleasurable and enjoyable day out.
An invitation was/is extended to anyone from Northampton CTC who wishes to join
us on any of the “Origami Rides” to come along as a guest. (you don’t have to be
riding a folder to join the rides as a guest) I have attached the the 2013 list
below, you will note the nearest one to us is Milton Keynes in May, but you will
be made most welcome at any other venue, we are a friendly bunch and the bikes
are interesting too!

I will provide start information before each ride, when it is e-mailed to me,
for those interested.

A Very Merry Christmas to everyone, have a splendid festive season,
TC

These are the Origami rides we have planned for next year :

If you would like company on a ride to the Regional Carol Service at Great
Bowden on Sunday, then Brian and Ian will be meeting at the BVW / Windhover at
10.00 a.m.

We’ll be going to the Waterloo Farm Café to join Max and CTC Kettering for
elevenses, then riding to the church.

Afterwards, we’ll ride back along the BVW.

Phil Ashbourn of CTC Milton Keynes just failed to become this year’s BBC Look East Unsung Hero.  This link will take you to the video from the BBC.  It’s well worth a look! 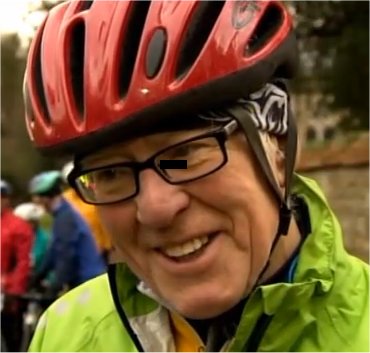 Phillip Gray will lead this ride and writes:

This Saturday’s ride is a gentle opportunity to burn off a few calories before Christmas – and to do some light Christmas shopping if you wish. Starting at the Brampton Valley Way (BVW) at 9.30 a.m. (near “The Windhover”) we will head to the Heart of the Shires “shopping village” for a coffee and a quick (optional) browse. The pace will be moderate and the hills not too numerous.

After a ride of about 25 miles we should be back at the BVW by 13.00 pm or a little earlier. I recommend bringing lights (at least a rear one) even though it is daytime.

To reach the Heart of the Shires, we may use the tunnel under the canal / railway at Muscott, which has a short rough track, if the weather is dry. If not, or if you prefer to avoid rough stuff, there is a good alternative via Brockhall.

Hope to see you there

NB The tea-stop is a change from the one advertised.