The four of us who set off for today’s brisk boundary ride around the circumference of Northampton thought we might get away with a dry ride.  Hah!  Barely 50 metres up the hill towards Boughton it started to rain lightly and kept that on and off all the way to Salcey Forest.

So after a compensatory coffee and cake at the café there while the rain settled to a steady downpour, we wimped out and took a more direct route back leaving the other half of the circuit for another time.

Phil Letts is leading this ride and writes:

We’ll start at 9.30 a.m. where the A5099 crosses the Brampton Valley Way for a brisk ride around the Northampton boundary of about 40 miles. We’ll circle the borough, keeping the Express Lift Tower as our ‘hub’ throughout the ride.  We’ll take in The Bramptons, Kislingbury and Rothersthorpe before pausing at Salcey Forest for an early brunch. Then we’ll complete the circuit through Quinton, The Houghtons, Ecton, Overstone, Moulton and Boughton.
Phil is on 07867 388592 for any questions.

David went on this afternoon leisure ride and writes:

Iain and Milton were at the start point where the Brampton Valley Way (BVW) crosses the A5099 when I arrived, followed shortly by John C suffering the effects of a bad cold, that he was sure would be the death of him.

We followed Iain along the newly tarmacked section of the BVW towards Mill Lane going under the recently completed railway underpass that has been designed to allow passage by bicycle or walker even when the river overflows with a raised section just wide enough to get through and under. 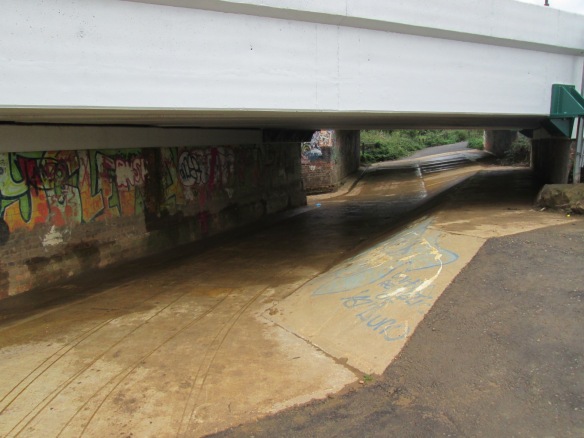 While heading up towards the Cock Hotel Brian joined us as we began the urban cycle ways of Kingsthorpe, passed the University Campus and through Moulton to Pitsford Reservoir. 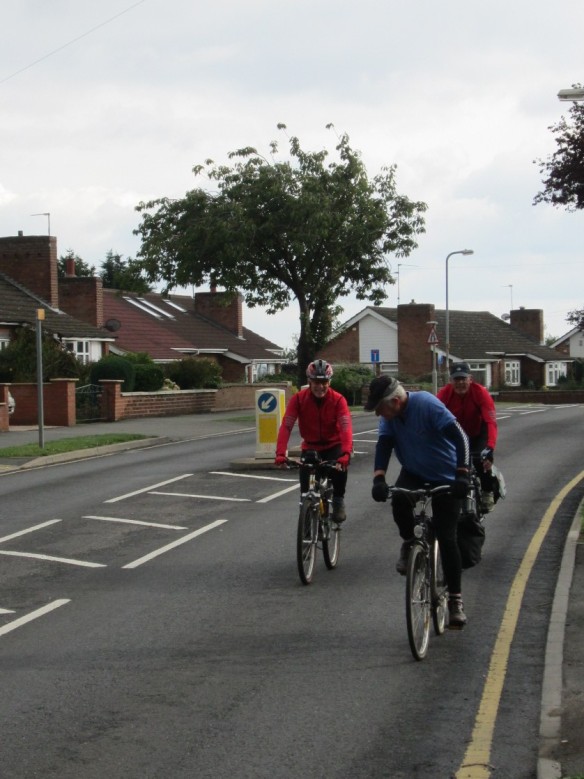 The ride round Pitsford Reservoir on the gravel track provided a pleasant view of the sailing boats as the terrain gradually changed to woods and tarmac again crossing the dam to the Willow Café for refreshments.

After a brief look at what the cycle shop had on show, we took the rough track trail connection back from Brixworth to our BVW start passing Brampton Halt and the trains along the way. A lot of varied and interesting sections from Iain’s led route.

On Saturday afternoon, we will be running a leisure ride combining the delights of backstreet Northampton with the more rural pleasures of Pitsford reservoir.

We’ll head briefly in towards town, hopefully down the Brampton Valley Way (if that section’s open again) (it is – thanks to the PhilL for confirmation), then up through residential streets and on cycle paths towards Moulton where we’ll strike out for the Reservoir, passing over the dam at the end, before making our way through Brixworth back down to the Brampton Valley Way and a well-deserved rest stop at the Brampton Halt, almost within spitting distance of our start/finish point.

Important note: A couple of route sections have been spared tarmac to date so, although mountain bikes won’t be required, it may be idea to leave the super-skinny race tyres at home.

On Sunday, we will be running the local annual Tourist Trophy event from East Farndon village hall.

Max Scott has spent many, many hours assembling this interesting event (an explanation of its various practices and diversions can be found here) which covers navigation, local knowledge and touring preparation. And, of course, some riding although that’s usually quite easy on these events.

The entry fee of £5 goes to benefit local CTC funds.

See you at one, other, or both.

We have two different perspectives on last Sunday’s ride to Rutland.

Brian’s Account
Following a request by email 7 riders assembled early at Moulton and we made a prompt start at 9.30am heading off north towards East Carlton Country Park for the coffee stop. The weather was fine and sunny with autumnal temperatures. However, within the first hour we were all stripping off layers as the temperature rose to a very pleasant summer’s day, just great for being out on a bike.

Phil L was only out for the morning but as he peeled off we were joined by John C as we approached the Country Park for coffee, where we sat outside enjoying the sun.

A long downhill sweep took us into the valley, past Eyebrook Reservoir and on to the caravan site of Sweet Hedges where we received a warm welcome and enjoyed a selection of roast lunches. It was tempting to stay in the rural setting enjoying the mid-day sun and good company, but as we were only half way we pressed on towards Uppingham before turning home through the ‘seductive’ Vale of Welland (Philip’s words although the long hill out of the vale provoked a different comment ! ). The route was then a switchback of hills on quiet roads through the hamlets of Medbourne and Weston, to the hidden Dale of Dingley, before re-entering the Shire with an ascent to the plateau of Harrington and Lamport and back to Moulton at about 4pm.

If you read the original rides email we did not fall victim to any Orcs, Nazgul or the rumoured Worm of Uppingham, but we did cover the 55 miles and it was fairly hilly with a little more than 1000 metres of climbing. Although many of the roads were familiar this was a new route and it amazes me that there is such variety of day rides in the county (and beyond). Well done Philip.

The Leader’s Account
On Sunday last, the 6th day of October, seven members of the Fellowship of the Flying Wheel left Moulton in the Shire for a challenging ride through many hills and dales, seeking the Kingdom of Rutlandia.

We were blessed with clement weather, perhaps the last of the summer. But during our journey, the Raucous Drongo was called home – to be replaced later by the Sabbath Rider at Rothwell.

We restored ourselves with the secret brews of East Carlton Country Park cafe, before continuing through the quiet, grand countryside near Eyebrook Reservoir. We followed the path less travelled to the well concealed restaurant of Sweet Hedges, where generous meals in the plain country style awaited us.

But here, as he consulted the ancient OS map, an awful realisation dawned upon our leader. This was not Rutlandia! In fact our route stayed just within the border of the Shire of Leicester, while the Mountains of Rutlandia towered overhead…

Forced to return without entering that fabled Kingdom, we wended our way back, over long energy-sapping hills and short sharp drumlins. But our spirits were lifted up by views of the Welland Valley, Dingley Wood and the Harrington Uplands.

We had ridden 56 miles and climbed over 3400 feet. For those who made it back to the Shire of Northampton, it was clear: another expedition will one day enter the Kingdom and penetrate its mysteries. The Fellowship shall ride again!

(I don’t know what the leader’s been putting is his cocoa lately, but I’ve never seen mountains in Rutland. A couple of sharpish hills, yes, but mountains? The mind boggles. – Ed)

Phil Letts led this ride to Daventry and writes:

A rather select group of four riders sped their way westwards in pleasant sunshine last Sunday on a brisk ride to Daventry Country Park.
We had a new rider to some of us (Milton) riding out so it was good to include a potential new member. Our journey out (25 miles) through some of the county’s delightful stone villages – West Haddon and Ashby St Ledgers – eventually enabled us to pick up National Cycle Network Route 50 through to Daventry Country Park where  we sat in the autumnal sunshine enjoying the traditional coffee and cake.
It was a straightforward and shortish 10-mile return trip through Norton and the Bringtons to top off an enjoyable 35-mile leg-loosener!
Philip Gray leads this ride and writes:
This Sunday’s ride takes us from the gentle hills of The (Northampton)Shire to the remote and craggy Kingdom of Rutlandia. Travelling via Broughton, Rothwell and Rushton, we shall seek refreshment from the good Caterers of East Carlton (Country Park) before entering Rutlandia. Then our route will take us north past Eyebrook Reservoir to sanctuary and a midday meal with the Travelling People (whom some call the Camp-Caravanners) of Sweet Hedges.
We will return through the seductive Vale of Welland and hamlets of Medbourne and Weston, to the hidden Dale of Dingley, before re-entering the Shire by a little-known route and tackling the gradual ascent to the plateau of Harrington and Lamport. From there it is a brief down, up and down back to Moulton.
Assuming we do not fall victim to any Orcs, Nazgul or the rumoured Worm of Uppingham, we shall have covered 55 miles and around 1000 metres of climbing by our return.
If you feel called to this adventure as one of the Fellowship of the Flying Wheel, please gather at the Co-op in Moulton on Sunday 6 October. As this is a longish and slightly arduous route, I would like to leave promptly at 9.30 am, so please aim to be there at 9.15.
Please let Philip know if you have any questions. Tel 01604 720522 or email philip.g@ctc-northampton.org.uk.