A sunny but windy day greeted the seven riders at East Hunsbury for this second club ride to Draycote Water this year. They included new boys Norman and Geoff as well as recent newcomer Tim.

Assembling at the start in East Hunsbury

Once over the cycle paths at Pineham, which allowed everyone to warm up, we hit the road proper at Harpole culminating in the short sharp climb onto the Roman Road. The next few miles around Harlestone allowed all the riders to recover before the long haul up to the top of Brington Hill where we saw other cyclists reaching the top just ahead of us.

The journey through the village of Whilton was pleasant and the fast decent into Whilton Locks even better although we did seem to have no choice but to pedal downhill due to the force of the wind. The sun seemed to have long gone at this point too.

The gated roads from Norton beckoned and apart from the first corner of gravel posed no problems for the group and were virtually traffic-free. We pressed on towards Welton at a steady pace and onto Barby before an impromptu stop outside Barby Nurseries for everyone to take on whatever fuels they needed.

On the move again we soon hit decent road conditions over the border into Warwickshire and another long haul towards the main road into town. Cycle paths provided much welcome protection from the busy road into Dunchurch before the last mile or two on the A426 into Draycote Water.

All but one of us chose the much talked about Draycote scones – some riders even suggesting they could eat two! At this point Geoff decided that he would make his own way back home and so the six of us set off on the return journey. 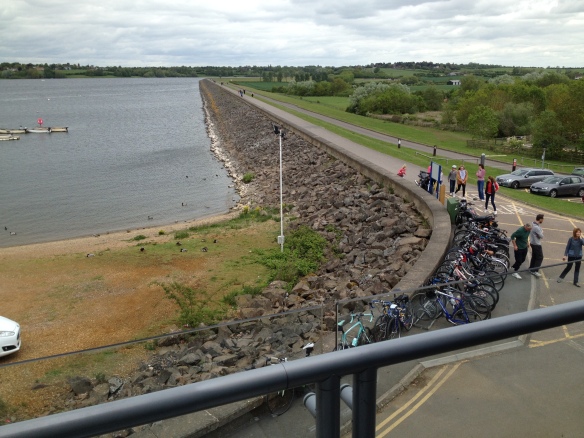 View of bikes, dam and reservoir from Draycote Water café

The lane through Grandborough was welcomed by the group as new tarmac seemed to have been laid for a good couple of miles. Willoughby was then next en route where we slowed to admire some fantastic classic cars assembled by the side of the road. We cruised through Braunston before re-joining the route we had come in on just outside Welton.

The gated roads on the way back provided one of the biggest climbs of the day with a two-tier climb before eventually reaching Norton again. A byway was the next part of the ride and proved interesting in a number of ways. Two fast descents with plenty of gravel at the base of each provided a hair raising experience for us but we all escaped unscathed. The surface then became more off road than road as we slewed and slid our way out the other side and again nobody came unstuck.

Back on solid ground we skirted around Brockhall and onto Flore with another climb or two to keep things interesting. The pace then gathered somewhat through Nether Heyford and Bugbrooke but everyone regrouped towards Rothersthorpe for the final push home. With nobody opting to go their own way all six riders returned to the start but not before climbing “Mount Tesco” – a great achievement with almost 60 miles in our legs.

I think we feared the worst as five of us assembled at the start of the Brampton Valley Way for the start of today’s 50-miler … because the rain came down and didn’t stop for the first hour and a half!  And, OK, this was “billed” as the “Four Reservoirs” ride – but they were supposed to be in view on the horizon, not streaming around our bikes!  Was that set in for the day?

Anyhow, by the time we’d had a welcome coffee at Guilsborough, the skies cleared somewhat and we started to dry off.  So we ticked off Pitsford, Hollowell and Ravensthorpe reservoirs before stopping for brunch at Daventry Country Park and its reservoir.

But the climate still had a short, sharp shower up its sleeve as we headed into Brington!

It was an enjoyable ride – good to see folks again!