Nine riders met at East Hunsbury for the ride to Woodford Halse on Saturday. The weather was reasonable for January; not too cold and reasonably dry.

The groups decided to ride together for most of the route, with those riders that wanted to, splitting off at Preston Capes to follow the slightly longer route. However, due to inadequate preparation, the Leader, yours truly, found that his Garmin didn’t like the plotted course, presumably upset because the course route crossed itself in a figure of eight.

So, with the Leader’s Garmin helpfully suggesting U turns at regular intervals, and Milton’s Garmin periodically dropping into sleep mode, it was left Brian to fill in some of the course details on-route.

The group stayed together until Preston Capes, where Brian took the Moderate Group directly to the café stop and directed the Brisk Group towards Priors Marston to follow the Brisk Route.

After an enjoyably fast and long downhill, the Brisk Group realised that Brian, uncharacteristically, had clearly given incorrect directions on purpose. This meant that the Brisk Group had to retrace their tracks, up the long hill and thus decided to go more directly to the café stop to recuperate.

Eventually, the two groups were enjoying the wonderful cakes and bacon butties (Hartley!) at the Equestrian Centre, with Chris amusing us with his stories of derring-do on training rollers. The group then readied the bikes for the return leg.

The first is not to trust the Garmin (or, indeed, Brian) without trying the route first.

The second is that Milton is now the club’s go-to expert Garmin user, when it works (there Milton, I’ve said it publicly).

The third lesson is that some bike locks are not easy to remove when they go wrong, and the combination lock with which I had secured Hartley’s bike to mine decided not to unlock, no matter how hard we tried. Fortunately the staff at the Equestrian Centre came to our rescue with a bolt cutter, a hacksaw and a pair of pliers, and we cut through the cable with a bit of effort. No fingers were lost.

Chris enjoyed taking photos of us struggling, and the rest of the group supported the effort with a constant barrage of snide remarks. 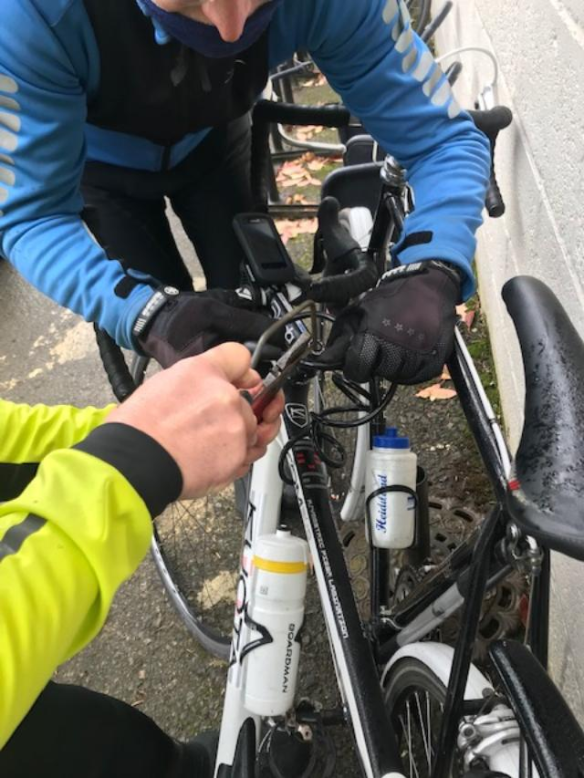 Apart from the occasional swear word muttered by Milton about his gear problems (he’d just had the bike serviced), the return leg was enjoyable and uneventful.

Thank you to all who turned out ………. I promise to check the Garmin prior to the next ride I lead, or revert to an old fashioned map!