Brian led this ride and writes:

Spring like temperatures and the sun brought 13 riders to the start at East Hunsbury for the circular ride to Whittlebury Bakery. We welcomed new riders Peter, Andy and Darryl. In true race fashion we had a neutralised roll out of the whole group off Hunsbury Hill and down to the small cycle path which led us onto Banbury Lane.
As the lights on the bridge changed the Brisk group of six took off under the leadership of Philip G whilst the seven moderate riders set off behind to enjoy the sun and the countryside.
The route was out in the direction of Bugbrooke where the two rides split, the moderate group heading for Litchborough and Maidford . They then headed SE in almost a straight line down to Silverstone which was a welcome stones throw from Whittlebury. The café is at the top of a short steep climb so the stop for coffee and cake was appreciated.
The Brisk group had a couple of the new riders and started slightly fast, but found its rhythm by Weedon. Here a leg-stretching extra six mile loop began, including climbs through Weedon Bec, and the steep hill from Everdon towards Fawsley and its dappled woods.

After several more hills they reached the café just as the Moderate group was queuing up for the coffee. The ride must have been somewhat of a challenge as most of the brisk group ordered double cakes (well it was a bakery!).

The arrival of such a large group overwhelmed them at first but reinforcements were called in and everything was first rate.
Re-fuelled the group returned the 10 miles to EH aided by a tail wind. Thanks to Philip Gray for leading the Brisk group. 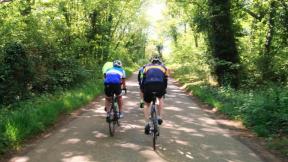 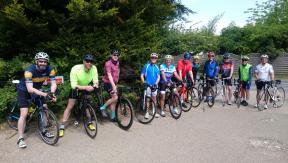