PhilJ went on this ride and writes:

A great days riding was enjoyed by everyone on todays ride. No mechanicals, no punctures, just good solid riding around a great route devised by our webmaster Tim H.

Our destination, The Emmaus Centre is always a popular stop for cyclists with its lovely spacious café complete with seating indoors and out. It’s great that they provide bike racks for our benefit giving it that cycling friendly feel.

Emmaus Village Carlton is a homeless charity based in north Bedfordshire offering active support to formerly homeless people. It’s a drop off centre for your unwanted goods on one side of the street with the café located on the other.
Tim insisted this was a steady ride and led the riders out through the well ridden villages of Cogenhoe, Castle Ashby and Bozeat before we enjoyed his planned descent at Dungee Hill.
Despite seeing the three mile signs for Carlton at one point, Tim insisted we continue on a 12 mile loop to build up our appetites. Through, as it happens some very quaint villages like Felmersham and Pavenham. The road undulated most of the ride and by the time the signs appeared for the Emmaus Village we were ready for a break.

Fortunately the electrical problems that had occurred in the village on one of our previous rides to Emmaus didn’t repeat themselves and we were able to enjoy good food and drink without problems. The fayre is superb at this café and the recommendation of the sausage sandwich was hard to resist by several of the group. The service was second to none and despite the numbers nobody had to wait for any orders.

Geoff from our Kettering group arrived to join us and tested the bike parking facilities only to upend the rack his bike was leaning on. I’m sure it wasn’t the weight of Geoff’s bike that caused the issue but the weak foundations of the rack. Nonetheless it was amusing for everyone there! 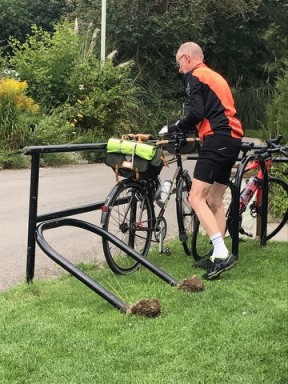 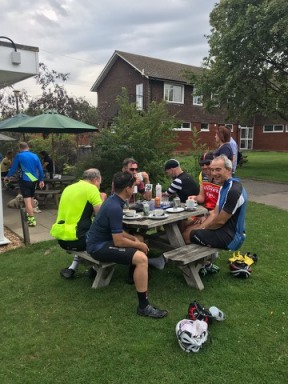 The ride back from Carlton was equally as picturesque as the ride over with some negotiation required on the short stretches of busier road along the way. The group split here and there but Tim held the pace nicely for the accompanying pack. A second stop at Salcey Forest was considered but there were no takers and we were soon flying down Quinton road with the end in site.
Along the way hoards of cyclists were everywhere including TT riders speeding along Bedford road just as we set out. It’s good to see so many club and occasional cyclists out on the road.