PhilJ led this ride and writes:

Given that the day was grey as far as the eye could see, we had a decent turnout for our ride over to the Ten Hands Café Bar in Towcester. No doubt named after the measurement for horses with the history the town has with racing them on the nearby racecourse and the stables around the town.

Five opted for the brisk ride kindly led by James C whilst I attempted to use nothing more than my fading memory to get the three moderates round Giles’s undulating course. Pete B and Phil L provided excellent company on the shorter route.

The brisks seemed reluctant to be brisk early on, no doubt saving themselves for the increase in speed and elevation to come later on the longer route. In fact they only really scarpered on the long haul up to Litchborough. The moderates, not far behind but content to forget about time, distance and average speeds on the damp, dank roads and just enjoy the ride.

The route was well signposted so there was little chance of going off course and it wasn’t long before we found ourselves heading for Greens Norton when the phone rang. It was our hosts checking on our progress for the 11 O’clock reservation.

Just Towcester high street stood between us and the warmth of the old Dolphin café and we sliced through it with ease. Including the busy roundabout across the A43, much to our surprise.

The choice of food at Ten Hands is extensive and Curried Parsnip soup proved hard to resist. It was quite exquisite. The accompanying ‘Mint Mountain’ tea that I ordered seemed to be of some interest to my fellow riders with Phil L describing it as antiseptic as both of them proved to be totally unadventurous in an artisan café with the usual americanos!

Some time later the rest of the group rocked up for their well deserved rest. Pete S looking like he had been off-road for most of the journey. Chris D failing to resist the curried soup whilst others doubled up on savoury food and cakes. The extra loop and elevation had earned them that much.

The moderates, having had a rather extended café break left for home with the brisks still enjoying the fine fayre of this classy establishment.

A short stretch along the A5 would get us to Heathcote and on the road to Shutlanger. Philip Gray, having been out with the MK group joined us briefly up to the turn for Blisworth before he went his own way. By now the rain was falling quite considerably with any type of shades almost useless. With the swift run in from Milton Malsor the ride was complete.

Thanks to everyone who turned out today. I think the café stop was worth it. 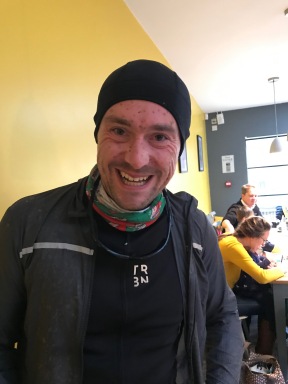 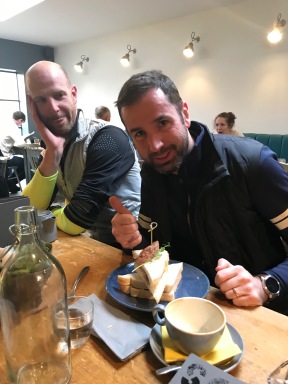