Five riders made the rendezvous point at the Windhover/BVW to enjoy the delights of this ride led by Alex (Alex, Miriam, Terry, Milton and Nick).  Maybe it would have been more but the previous evening’s weather forecast was not particularly fair.  As it turned out however the rain had cleared, the sun was out and the wind was blowing.  A great day for drying your washing but an even better one for riding a bike!

We set off in good spirits and headed north through Church Brampton before hitting the hills on the roller-coaster roads heading east from Holdenby through Spratton and up to Brixworth.  Happily each of the hills was easily conquered with the large helping hand supplied by the not inconsiderate tail wind.  It was then north and north-east through the picturesque lanes linking Brixworth to Cottesbrooke and Haselbech.  On the hill up to Haselbech we were reminded of the need for caution when riding near horses when an oncoming beast (with rider) was seriously spooked.  Apparently it was something to do with the sight of Milton’s knees!

Onwards to Naseby and then a seriously fast descent in the direction of Clipston (wind-assisted) but then turning south-east to Kelmarsh and Arthingworth.  From here we climbed the Strava Queen of the Mountains section used in Wednesday’s Stage One of the 2014 Women’s Tour of Britain.  At the top, outside the Tollemache Arms pub, we paused for a breather.  It was at this point that we realised that we had actually ridden three of the four Queen of the Mountain stages used on Stages One and Two of the Women’s Tour.  A little bit of messing about with a smart phone and we were ecstatic to discover that all five of us had ridden two of the sections faster than the professional riders on Wednesday and Thursday had.  FANTASTIC – however, just for the record we did it in the opposite direction …..

Not long after Arthingworth it was pay back time; we turned right and headed south and south-west across the flat land of the former aerodrome at Harrington which put us right into the teeth of the gale!!!  Alex was the leader so we all hid behind him.  We took a hilly detour off this road through Draughton – its a strange day when you prefer including a hill to avoid the flat – but it did cheat the wind. 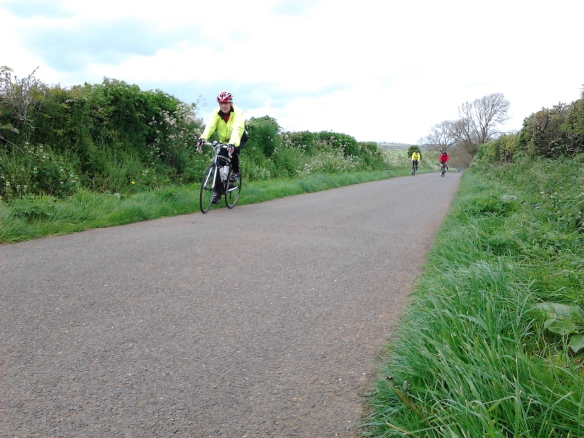 Through the villages of Old, Walgrave, Hannington and Holcot before closing on the destination of Moulton.  Terry and Milton peeled off for home whilst those left enjoyed a coffee at the J-Gallery in Moulton before wending our way home. 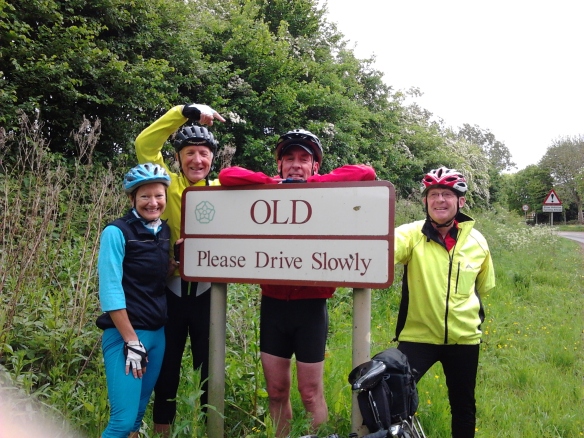 Game for a laugh!

Grateful thanks to Alex for leading this ride. It lived up to its name and happily, despite the often ominous clouds scudding along, we did not get rained upon.

The route is here on Garmin Connect.

Iain Dawson, our Rides Secretary, went on this ride led by Philip Gray and writes:

On a chilly, but ice- and snow- free morning, eight of us (Hi Alex, Hi Kieran) gathered outside the Co-op in Moulton for the first ‘brisk’ ride of the year.

Our leader, Mr Gray, had planned us a route that he said didn’t involve too many hills but the lack of hills didn’t really matter as we were soon getting our exercise thanks to a stiff easterly blowing straight into our faces. Oddly, it seemed less of a wind when it was behind us.

Having made it up to Broughton fairly easily, and from there past the old airfield at Harrington to Kelmarsh, we hit slightly lumpier territory climbing out of Kelmarsh (no stopping for tea!) and down to Maidwell where we regrouped. From there, back roads through Draughton and Scaldwell took us over a few more lumps before we crossed Pitsford on the causeway to make the J-Gallery in Moulton in good time for a coffee.

Thanks to Philip for planning such an inventive route, and to Phil Letts for keeping watch at the back of the group. Hopefully we’ll see more of you on the next rides, including Phil Letts’ brisk ride on February 2nd.

Philip Gray will be leading this ride and writes:

Join us at Moulton Co-op at 9.30 a.m. for a 30-mile ride in the general direction of Broughton & Market Harborough. This will be a “brisk” ride but sensibly paced for the time of year. There will be a few hills but the aim is to avoid too much sweat. Any lost fluids will be replaced afterwards at the J Gallery in Moulton.

Hope to see you there