Brian, our Rides Secretary, has planned a lovely ride for us this Easter weekend:

The ride takes us out through Guilsborough, Cold Ashby and Yelvertoft on mainly quiet country roads to Catthorpe (23 miles) for lunch at the Manor Farm Kitchen Café.

We return is via the outskirts of Rugby and through Barby and Norton with a possible tea stop at Whilton Locks.  Then through Great Brington and back to BVW.

Note that this is also the first ride of BRITISH SUMMER TIME this year !

Every year the CTC Heart of England Rally and St Laurence Church, Meriden, commemorate the cyclists who gave their lives while serving their country in the two world wars at the National Cyclists’ Memorial in the centre of England.

This year the service was blessed by the Bishop of Warwick and a new plaque was officially unveiled in honour of those cyclists who have perished in conflicts since 1945.

The Bishop of Warwick unveils the new plaque 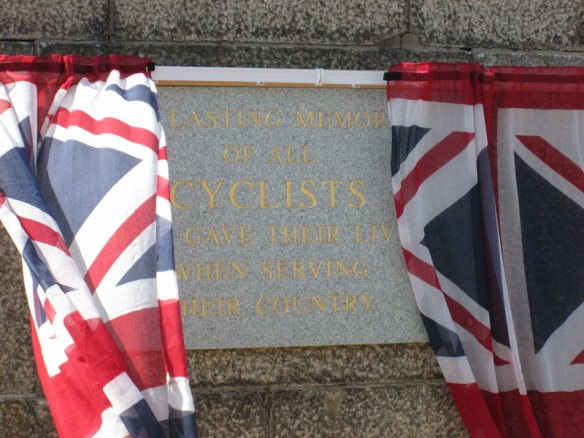 The inscription on the new plaque

Bill and I went by train from Northampton to Berkswell, where we met up with Iain on his large-framed fixie. The Service started at 11.00 a.m. which gave us just enough time to stop at a farm café on the edge of Meriden village. The place was full of cyclists including John D, George, Bob and Sue. 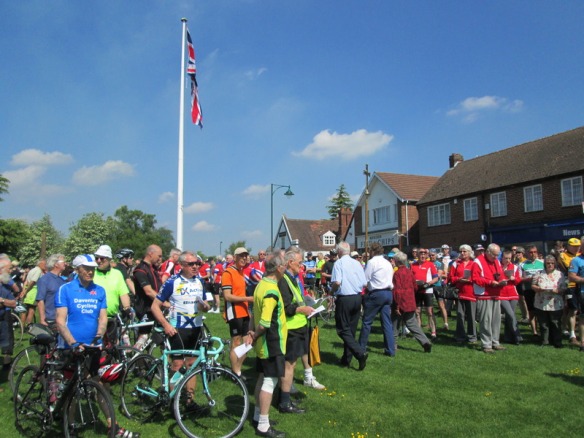 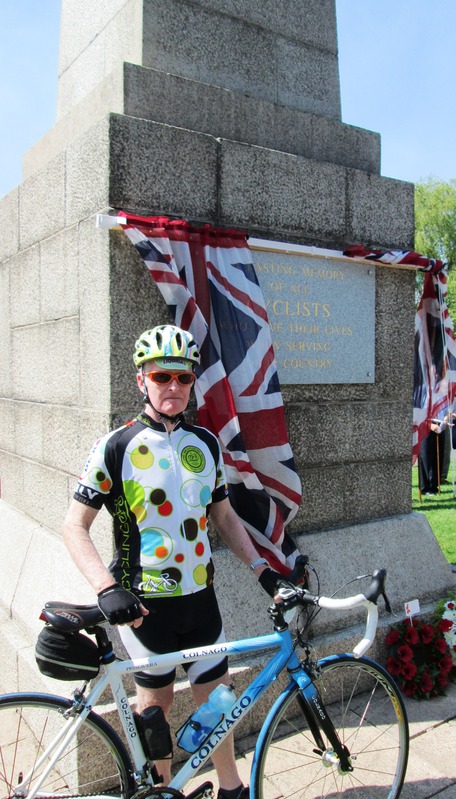 John D at the Memorial

After a short chat we set off together to the village green, arriving just as the memorial service commenced with a sermon by the Bishop.  The service included the Bulkington Silver Band playing hymns, a talk, and the laying of wreaths at the memorial obelisk at the end.  It was blessed with glorious sunshine. 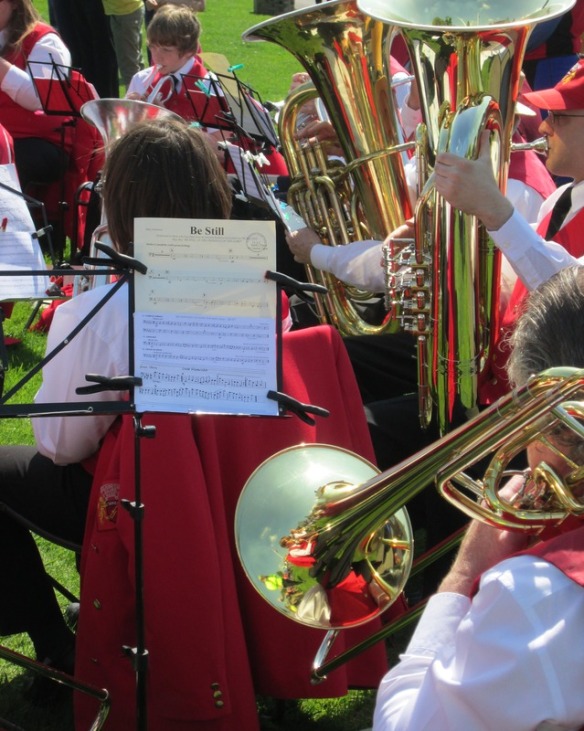 After the service we rushed down to the village hall to beat the queue of cyclists for tea and cake. Inside the hall a brief history of Meriden Memorial was on display. 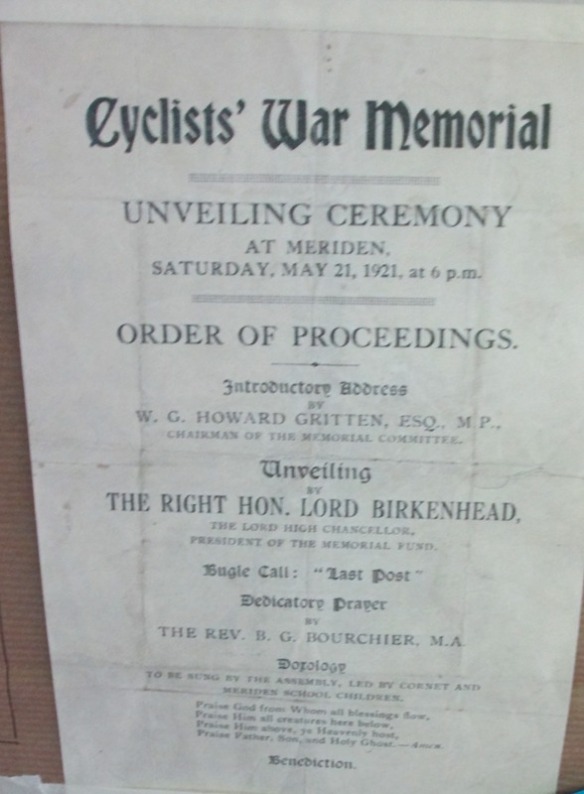 The Order of Proceedings from the original unveiling in 1921 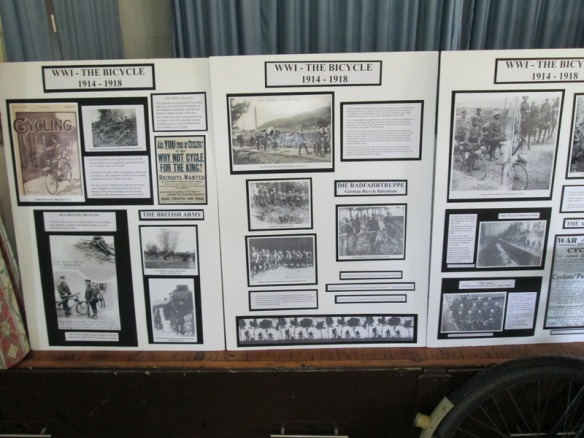 Part of the display

Max and Richard were there but had missed the service due to an accident on the motorway.

After refreshments Iain made his way back to Coventry, leaving Bill and I to catch the train to Rugby and cycle to Northampton.

Brian, our Secretary, went on this ride led by Philip G.  He writes (with photos by David):

2014 has started really well for the CTC Northampton group with another good turn out for a ride on a cool but sunny day. A great day to be out on the bike; difficult to believe it was mid winter!

Ten riders left the Brampton Valley Way (BVW) / A5199 crossing point at 9.30 a.m. led by Philip G on an interesting route via Great Brington to Guilsborough for coffee.  We were ready for it as the route had taken us on several quiet roads sporting an OS map arrow, (gradients greater than 14% i.e.1 in 7), two down and two up !! 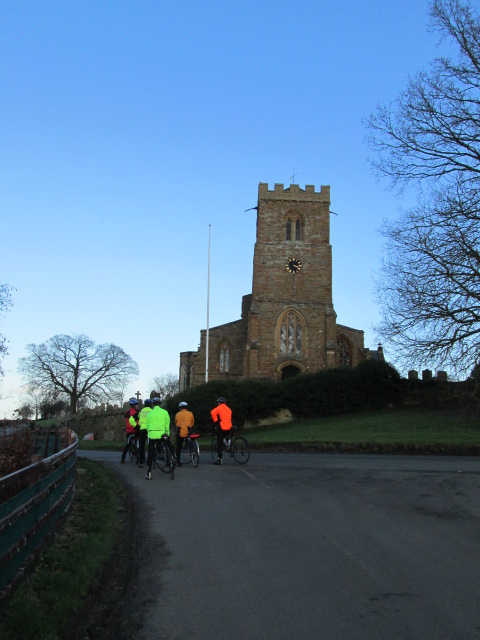 A brief do-it-yourself coffee in the village shop and we were off to Catthorpe passing Cold Ashby and the highest trig point in the county, Honey Hill.  At 12.15 p.m. we arrived at the friendly Catthorpe Manor for lunch where our reserved table was awaiting. There was a good choice of food from snacks to Sunday lunch. 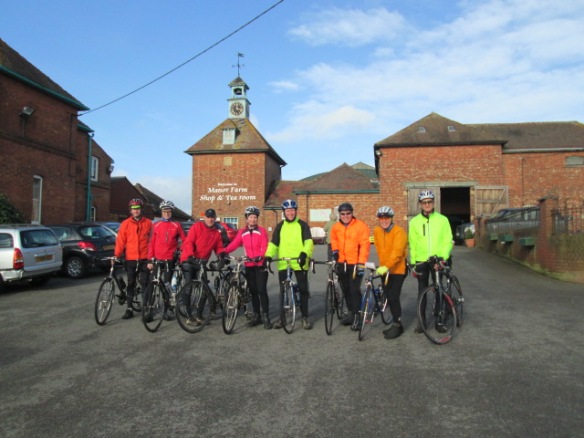 At Manor Farm, Catthorpe, after lunch

Suitably re-fuelled we set off into a strong west wind to Rugby, which we skirted with ease, before returning to quiet roads again, with a number of cattle grids on the most remote ones.  With good navigation from Philip via Barby and Norton, we were back at BVW at about 4.00 p.m. still in good light.

It was quite a hilly ride at times (3000ft of ascent in 48 miles) but it was through very pleasant cycling country and with good company.  What a great way to spend a winters day! Well done, Philip!

The route is here on RideWithGPS.