Iain Dawson went on this away-day (or car-assisted) ride and writes:

The early morning mist in Northamptonshire didn’t bode well for the day, but by the time five of us (Phil Gray, Rowan, Brian, David and I) had met up and reassembled our bikes in the free car park (limited stay Monday-Saturday) in Watlington in Oxfordshire, things had cleared-up considerably.

Never one to miss an opportunity, Phil managed to grab a few minutes with a CTC HQ staffer who was part of another group assembling their mountain bikes in the same car park. Mountain biking does seem to be quite popular in the Chilterns, based on the number of muddy cyclists we saw out on the roads.

Pleasantries concluded, it was time to head out on the route. Out of the car park, turn right and straight up 400 feet of hill. Well, we had to get up there sooner or later. 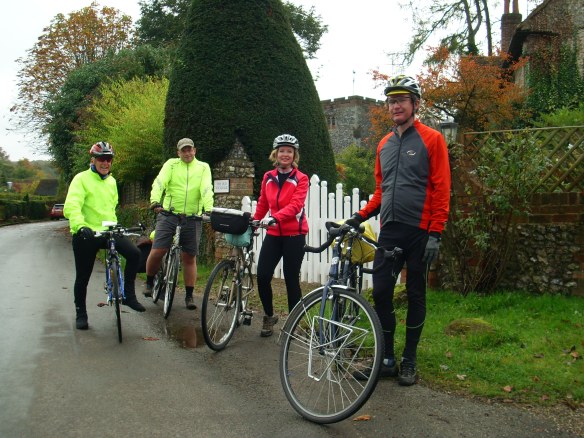 First stop was the village of Turville, or Dibley as it’s known in TV land, with views across to Caractacus Potts’ windmill before picking up signs for the Chiltern Cycleway, which I’m sure is local slang for “hills”, and crashing the route of a 10k road (running) race that appeared to be in its final stages in Frieth (Buckinghamshire). Another climb (and a vineyard) later and we were back on the top of the hills riding through fallen leaves and traditional woodland before plunging down onto a well-surfaced cycle path and into Henley. Where we got lost. I should mention, in fact, that not only were the locals in Henley very friendly and helpful in directing us to the excellent café at the River and Rowing Museum, but the local motorists seemed to be a lot more considerate than we’re used to as well!

Recaffienated, and with sense of direction restored, we set off for lunch at the Reformation in Gallowstree Common. A brief ride of a few miles to a pub where they really know their food.

After lunch it was off through more of the traditional woodland, past some suspicious-looking satellite dishes and up a “Quiet Lane” (whatever that is; it was pleasant though) to a well. A 360+ foot well, the money for which was provided by an Indian Maharajah to benefit the inhabitants of the village of Stoke Row. 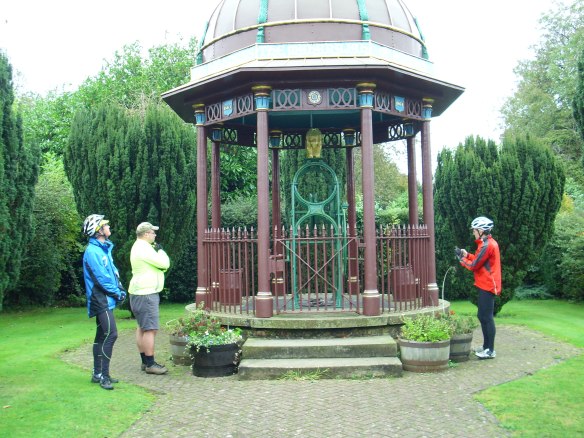 From there it was mainly downhill for the remaining few miles back to Watlington where we returned, a little later than expected, to our cars.

All in all, an excellent day out. I believe the mileage was a little less than we normally cover on a day ride, but with so much new stuff to see, it’s hardly surprising that we made a full day out of it and I’d like to thank Phil for putting such an interesting route together. The rest of you missed out.

Philip, our Chairman, is leading this ride and writes:

This Sunday, 21 October, CTC Northampton is offering a special, car-assisted Autumn ride through the Chiltern Hills, in an area of great natural and historic interest.

Further details to follow but the main points are:

This ride will take in two national Sustrans routes, the Vicar of Dibley’s village, the Chitty Chitty Bang Bang windmill, two ancient drovers’ routes and of course the Maharajah’s Well. And did I mention the hills, which give this area a special beauty – and challenge?